The solvent is a common but avoidable source of contamination, as methods of solvent purification are well known. Deionized water should be used to make the electrolyte for aqueous electrochemistry because tap water contains trace metal ions. For non-aqueous electrochemistry, small amounts of water contamination can usually be accommodated, but one should make an effort to minimize water content, as it is fairly easy to obtain water concentrations below 5 parts per million (ppm). Common solvents for non-aqueous electrochemistry include N,N-dimethylformamide (DMF), acetonitrile (MeCN), tetrahydrofuran (THF), dimethylsulfoxide (DMSO), 1,2-Dimethoxyethane (DME), and dichloromethane (DCM), but electrochemical experiments can also be performed in supercritical gasses or ionic liquids. Sufficient drying is usually possible by passing the solvent through a column of activated alumina, followed by storage of the solvent over activated molecular sieves. 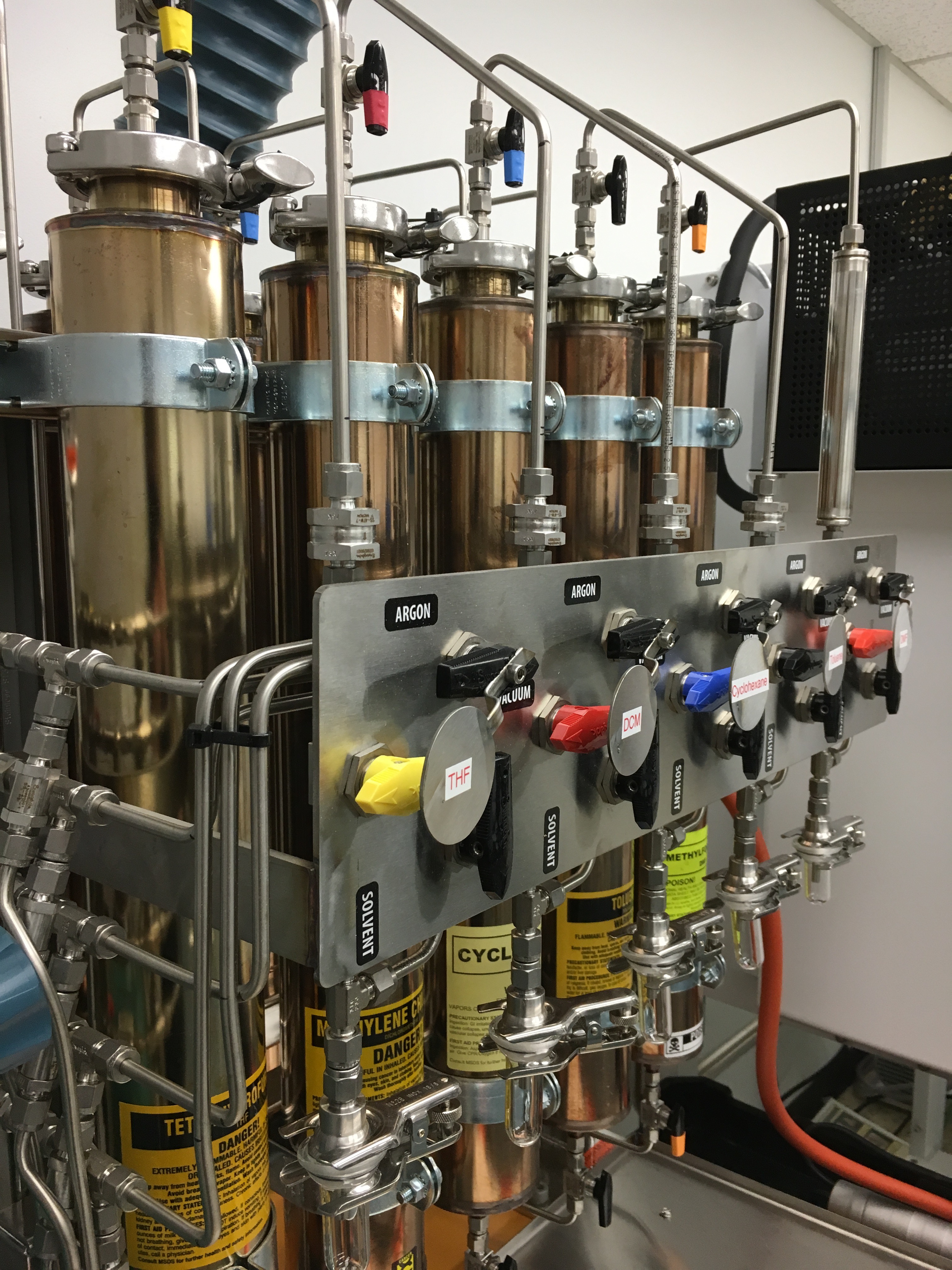 Other methods of drying include stirring or refluxing over a drying agent, such as calcium hydride (CaH2), sodium hydride (NaH), sodium metal (Na), phosphorus pentoxide (P2O5), or molecular sieves, followed by distillation under an inert atmosphere. Non-aqueous solvents for electrochemistry should be stored under an inert atmosphere and over activated molecular sieves. Drying agents have to be carefully chosen according to the solvent because some are more effective with certain solvents and others violently react with the solvent. Consult the literature or your labmates for your labs accepted methods of drying. 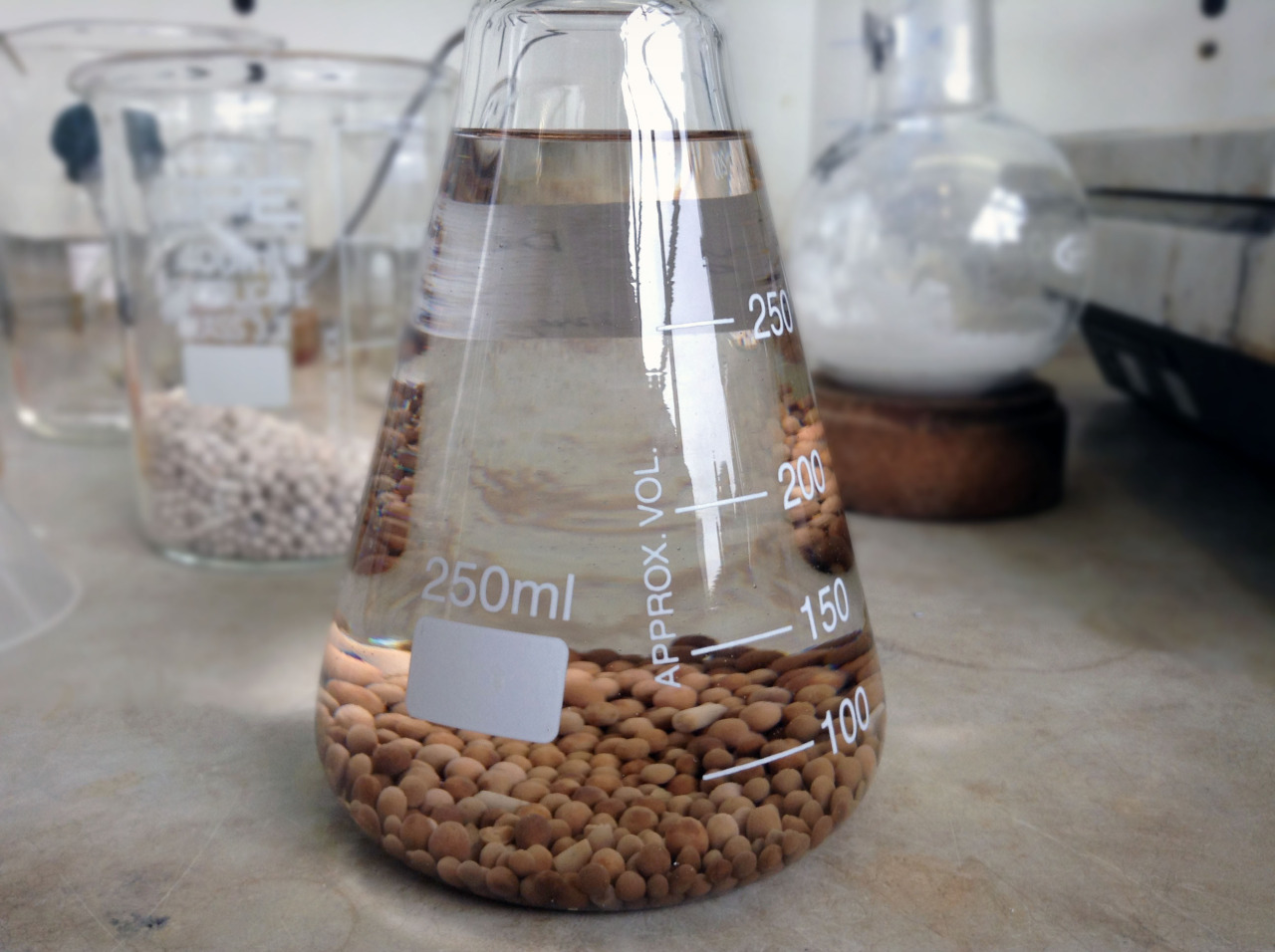 The electrolyte salt allows for the passage of current through the solution and it is essential in preventing charge buildup at the electrodes and the collection of useless data. It needs to dissolved in the solution in large excess, usually at concentrations ranging from 0.1 to 1 M (moles per liter). Some common electrolytes for aqueous electrochemistry are the alkali metal salts of nitrate, borate, halides, phosphate, phosphonates, carbonate, sulfate, and perchlorate. Concentrated solutions of strong Brønsted-Lowry acid (sulfuric acid (H2SO4), phosphoric acid (H3PO4), perchloric acid (HClO4) or base (potassium hydroxide (KOH), sodium hydroxide (NaOH), or lithium hydroxide (LiOH)) are also acceptable electrolytes. A pH gradient may build up at the electrode if H+ or OH– are generated during the experiment (as in the case of water electrolysis, H2 oxidation, or O2 reduction), which will effect the redox behavior. This can be overcome by adding a high concentration of buffer (which can act as an electrolyte salt itself) to the electrolyte solution; otherwise the data cannot be trusted.

In most cases, the electrolyte in non-aqueous electrochemistry is chosen so that it does not interact with the molecule of interest and will not be reduced or oxidized within the range of electrode potentials that will be experienced during the experiment. Tetraalkylammonium (NR4+) salts are common non-interacting cations, with tetrabutylammonium being perhaps the most commonly used (and least interacting). Popular electrolyte anions include ClO4–, PF6–, and BF4–, or fluorinated tetraaryl borates (BArF4–). Alkali metal cations and halides may be used, but one should realize that they may influence the redox behavior of the molecule of interest. For instance, iodide (I–), bromide (Br–), and chloride (Cl–) anions may be oxidized to form I2, Br2, or Cl2 at positive potentials.

Since it is required in such high concentrations, the electrolyte salt must be thoroughly purified because even a small impurity will ruin an experiment and waste the rigorously purified solvent. Electrolytes can be purchased in high purity, but usually a series of recrystallizations will remove most impurities. For non-aqueous experiments, the electrolyte should be heated under vacuum after recrystallization to remove any solvent or water that remains. One should consult the literature for preferred purification procedures.

The ability of the electrolyte to interact with the molecule of interest (the analyte) has a significant effect of the redox behavior of the analyte. Basic chemical knowledge of Lewis acid/base theory is sufficient to evaluate to potential impact of the choice of electrolyte. One may use this knowledge to purposely change the reduction potentials of analytes to their liking. This is discussed further in the Ion Pairing section.