Ion pairing is exactly what it sounds like, it is the tendency for ions of opposite charges to interact and partially cancel out their charges in the larger sense. The higher the charge density of an ion, the more strongly it will interact with an ion of the opposite charge. Charge density is also exactly what it sounds like, charge per effective area. The effective area can be visualized by surrounding the charged atom with a sphere of a radius as long as the closest distance an approaching solvent molecule can get. For example, three common cations, lithium (Li+), tetramethylammonium (TMA+), and tetrabutylammonium (TBA+), all have a charge of +1, but while Li+ is a single atom with a small effective area, the positive charge on a TBA+ cation is buried in the middle of four carbon chains which give it a larger effective area and therefore a smaller charge density.

Using our analyte X, and looking specifically at its X–/X2– reduction, if X– has a closely associated cation, it acts as if it has an effective charge between –1 and 0, with the magnitude of the effective charge depending on the charge density of the cation. Cations with higher the charge density interact strongly with a negatively charged analyte like X–, giving it a more positive effective charge, and therefore make it easier to add an electron to X– to form X2–. On the other hand, if a non-interacting cation is used as the electrolyte salt, the effective charge of X– is closer to –1, and will therefore be much harder to add an electron to form X2– (at a more negative potential). 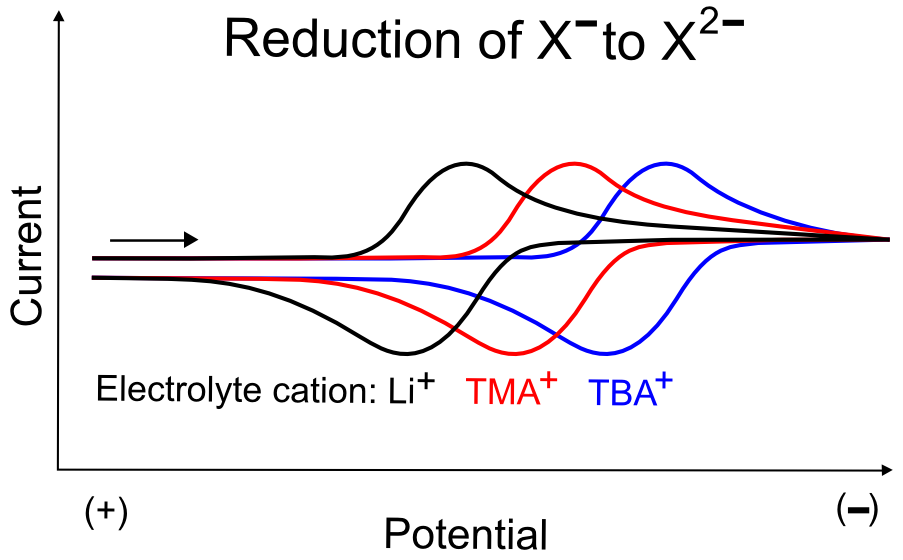 Alkali cations like Li+ tend to be coordinated by solvent molecules, and may have similar ion pairing effects as the relatively small TMA+ cation, but unlike TMA+, Li+ can bind directly to X if X has functionalities with lone pairs that can interact with Li+, such as amines, alcohols, thiols, ketones, etc. Intentional additions of strongly binding cations can be used to "tune" the potential at which electron transfer occurs between the electrode and X. Even if the electrolyte salt contains a non-interacting cation like TBA+, metal cations like Li+, Na+, K+, Mg2+, Ca2+, Sc3+, Al3+, Y3+, etc. can be added in. Preferably, the anion in the additive salt will be the same as the electrolyte salt (for instance, adding NaPF6 to a solution containing TBAPF6). CVs should be collected with several different concentrations of the additive, if an observable effect becomes more prominent with higher concentrations. If X is being screened as an electrocatalyst, and the substrate intermediate can bind cations, addition of strongly binding cations may help drive catalysis.

The same type of effects occur between positively charged analytes and electrolyte anions. Some common electrolyte anions with varying charge densities are chloride (Cl–), hexafluorophosphate (PF6) and fluorinated tetraaryl borates (B(ArF)4–), with chloride having the highest charge density and B(ArF)4– having the lowest. As a result, Cl– interacts more strongly with a cation (X+) in solution than B(ArF)4–. 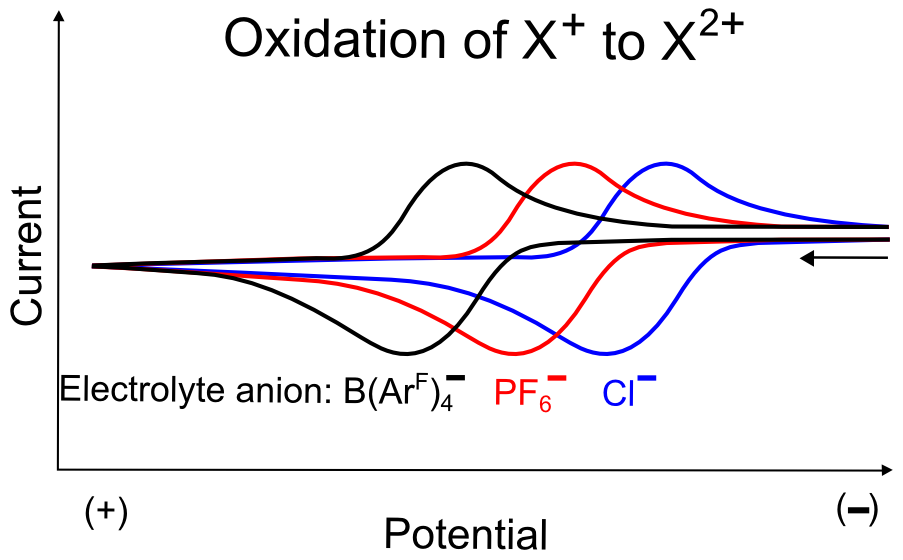