Electrochemical Potential of the Analyte

A long explanation of chemical and electrochemical potential often occurs at this point in an explanation of thermodynamics of electron transfer, but a qualitative explanation is possible given a few facts which will now be introduced. When we talk about electrochemical potential of an analyte, we are thinking of a collection of redox-active analyte molecules. Let's call this molecule "X," which can be reduced through addition of an electron to the species "X–." X and X– have different potential energies, and since the potential energy of a reduced species is higher than that of its neutral counterpart, X– has a higher potential energy than X. Imagine that we can create a solution of X and X–, the potential energy of that collection of X and X– can be changed by varying the relative amounts of X and X–. This relationship is described using the famous Nernst equation.

Hopefully some of the constants in the Nernst equation look familiar, R is the gas constant (8.315 J K–1 mol–1), T is the temperature (in Kelvin), n is the number of electrons transferred (1 in this case), F is Faraday’s constant (96,485 C mol–1), and CX (or CXˉ) is the concentration of the respective species (X or X–) in solution. E0 is known as the "standard reduction potential" of the reduction of X to X–. This value is calculated at 1 M concentrations at standard temperature and pressure, but for our purposes, we can assume that this value is equal to the E1/2 of the X/X– reduction measured in a solution with analyte concentrations much much lower than 1 M. The "E" on the left side of the equation is the electrochemical potential of the collection of X and X– molecules in solution. If we were to make a solution with 1 mole of X and 1 mole of X–, the electrochemical potential energy of the collection of X and X– molecules in solution will equal E0 (which is also E1/2). 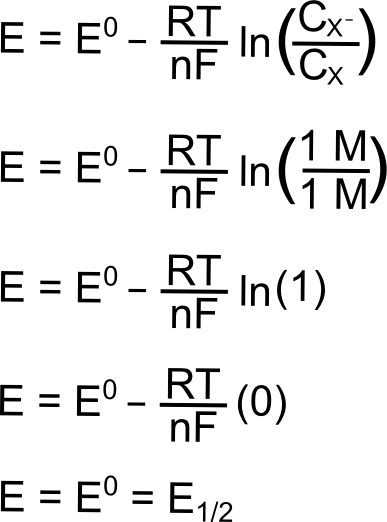 So in our theoretical beaker with our imaginary solution, changing the relative ratios of X and X– change the electrochemical potential, but this example is not directly applicable to cyclic voltammetry. In a typical CV, when we transfer electrons between the electrode and the X/X– molecules, the relative ratios of X and X– change in the microscopic area directly next to the electrode. Incredibly, this is all we need in order to observe the changes that result in a CV, which is why cyclic voltammetry is often called a "non-destructive" technique.

Electrochemical Potential of Electrons in an Electrode 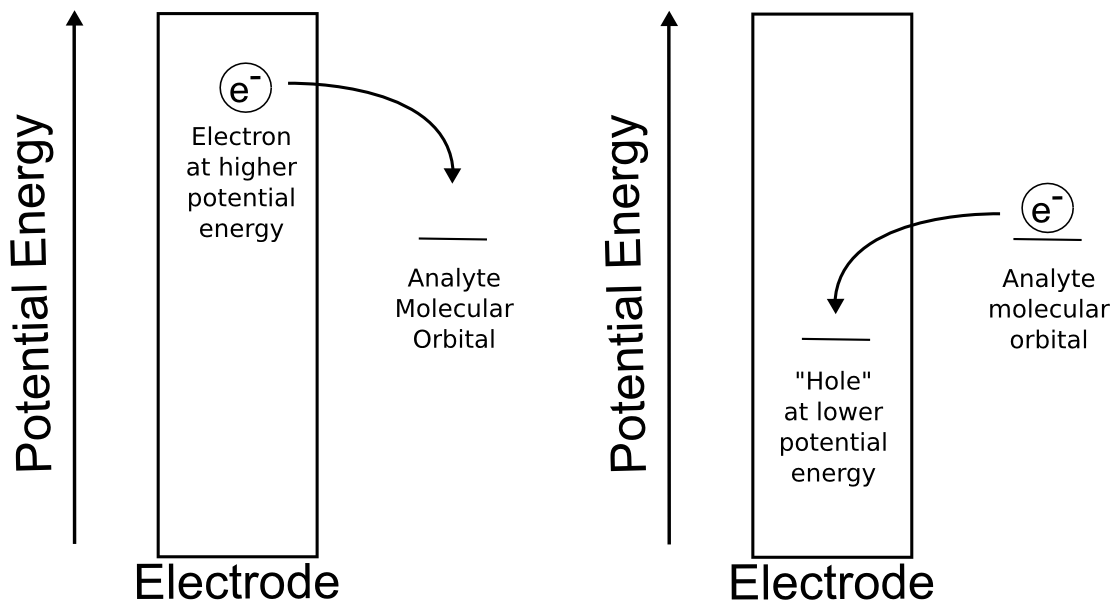